Gambling in Californians is booming. If you’re looking at a vacation to the Golden State you want to be sure you are familiar with the most popular games ahead of time. 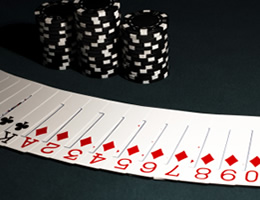 When it comes to living the ultimate gambling experience, there are a few places in the world which deserve to be visited. Gambling in Californians is booming, and there’s a place for you to play your favorite table games at every corner in the state.  If you’re looking at a vacation to the Golden State you want to be sure you are familiar with the games ahead of time.

In this article we bring you five of the most popular table games:

The Three Card Poker game is the fifth on our list. It is an exciting poker game which offers three ways to play, and four ways to win. The player can bet against the dealer, bet on the value of his three-card hand, or both. Wagering against the dealer can even bring the player special bonuses, depending on his winning hand.

Craps is a dice game, and one of the fastest of the casino table games. In it, everybody can win together (with the exception of the house, of course), and when everyone’s winning, the table can become loud and hectic, sometimes even scare people away. A maximum of 20 players and four staff members can play at the same time, meaning the table easily gets crowded, and with some of the best odds in the casino, it is no wonder Craps found its way among the top five popular table games in California.

Much as the classic Roulette, Mystery Card is a very easy game to learn, and some consider it to be the most entertaining way to play Roulette. In the game, there are 38 cards which are used for each round of play, labeled 0, 00, and numbers 1 – 36. As with Roulette, 18 cards are red, 18 black, and two are green. At the beginning of every round, players bet on the card’s number or color. After the betting is complete, the cards are shuffled and one will be turned face up and exposed as the winning number. Any bets placed on that number will win.

In this game, the goal is to assemble two hands of two or three cards with a point value as close to nine as possible. EZ Baccarat is played almost the same as regular baccarat except that it eliminates the odds differential between Player Line and Dealer Line wagers and replaces it by "barring" one specific winning Bank hand. That hand is also called the Dragon 7, and players can make an insurance bet on the Dragon 7, which pays 40 to 1, when the three card winning Bank hand totaling seven points occurs.

Probably the most popular game at the casino is Blackjack. A simple to learn, but hard to master game, it can easily bring tons of profit to the player. In it, players are served two cards whose value is combined. The goal is to reach as close to value of 21 as possible, without going over. The player, who doesn’t compete with other players but the dealer instead, can ask for additional cards.