When a movie or a television series becomes a hit, one can be sure that it will be transferred one way or the other to the world of online casinos. The Game of Thrones series on HBO is no different.

When a movie or a television series becomes a hit, one can be sure that it will be transferred one way or the other to the world of online casinos. Sites like this one, taking full advantage, with hundreds of casino games that you can play, from plenty of gaming developers.

The Game of Thrones series on HBO is no different, with Microgaming devising a slot title based on this hit television series with online casinos such as Betway Casino and the brands owned by Co-gaming adding it to their portfolio.

Like many of the popular titles from this developer, Game of Thrones features up to 243 paylines. It is based on the five reels setup with a total coin value at 25. This happens to be one of the first games on the mind of a player even as they are just entering the bonus codes for a casino.

The Game of Thrones welcomes a player to the world of extraordinary graphics and attention to detail. While there are several slot titles with one or the other, Game of Thrones tries to offer class leading quality in almost every facet. This is one of the best looking slot titles around with plenty of attention to detail given to even the regular card playing symbols. It sets the tone for the high value symbols, which feature association to the series and also hold plenty of detail.

The gameplay is quite fast, but it is significantly aided by a brilliant soundtrack. Special tones enhance the overall experience of the game, and they often occur during special features like inside the bonus games or even as a prelude to the trigger of free spins.

The two major symbols on the game are the Game of Thrones icon, which is used as the wild, and the Iron Throne, which is the scatter symbol on the game. The latter triggers most of the key bonus elements, and its occurrence is marked by a special soundtrack.

The bonus features on a slot game are extremely important, and developers know that these bonus games are a key factor in the selection of a title. It may be part of the reason why Game of Thrones slot is enriched by the availability of several features. They are:

This is an element of the game which can be triggered by getting scatter symbols on the reels. When three or more symbols occur on the reels, they will trigger the free spins feature. Even if just two scatter symbols appear on the reels, it will still be good enough for a cash prize – albeit not a free spins game. Once the feature has been triggered, the player is given the option of choosing from four choices. Unsurprisingly, the four choices have a connection with the Game of Thrones series, as they are named after the families. They are:

Stark – 14 free spins along with a 3x multiplier

Targaryen – 18 free spins together with a 2x multiplier

More importantly, these free spins can be retrigger from within the feature. Hence, they can pave way for extraordinary wins even on small stakes. Unlike in some of the games which are quite rewarding even on the base, Game of Thrones manages to hold most of its star asset within the free spins feature. 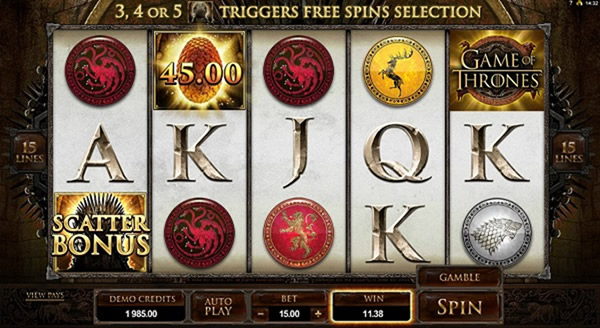 This feature offers a pure gamble element, which has been popular in slots over the last couple of years. Even here, Microgaming painstakingly delivers a lot of attention as the gamble feature is spread over in a story format. Each victory in the gamble section reveals a character from the series apart from doubling the stake.

Surprisingly, the biggest wins on the game do not come from the gamble feature. It is also recommended to skip this feature, as it only produces the probability of success even further. Even though players are getting a 50-50 chance of doubling the wins, there is too much to lose. It is best used on the smaller wins which would not have much impact on the coin credit.

Game of Thrones slot has been around for a few years, but it is easily one of the best casino games around. This well-designed game not only offers rich graphics and excellent soundtrack, but it also manages to complement the looks with some decent wins. The wins on the bonus game are of a decent size and they are reasonably frequent. Yet, the biggest wins can be accumulated inside the free spins feature. This is a must play game – even for those who have not seen the television series.