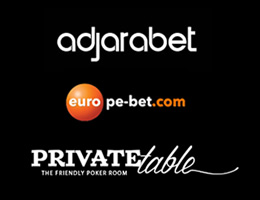 Overall worldwide cash game traffic dropped for the second week in a row, falling by 1% this week to go along with the 2% drop we saw last week.  This is in spite of Poker Stars’ traffic rising by 1000 players, from 19,000 to 20,000 on average, the highest level they have seen in 6 months. The rich keep getting richer it seems and while players may be unhappy there this dissatisfaction certainly hasn’t affected their traffic, and it has actually gone up significantly over this time.

888 Poker and iPoker kept their usual spots of second and third.  Pokerstars.it is on a nice run lately and they have climbed into fourth place this week.  Full Tilt moved down a spot to fifth, Bodog climbed from seventh to sixth, and Party Poker dropped all the way to seventh from fourth.  Adjarabet is back in the top 10 again, moving from eleventh to ninth place.

Among the top 10 sites, 5 of them gained ground while the other 5 lost traffic.  Compared to this week last year, the market is down 14%, a slight improvement over last week’s decline of 15%.

After an incredible ride from a huge promotion that saw their traffic dramatically increase over a period of several weeks, Georgian online poker site Adjarabet saw themselves drop all the way back down out of the top 10 again last week, and it seems that they are not all that satisfied with seeing this happen and want to try to ramp things up a bit again.

So this week they rolled out another promotion, called Magic Hand, where they are set to give away over half a million dollars.  This ended up providing them with a nice boost this week, and increased their traffic by 10% to at least get them back up to ninth spot for now.

The real magic may be over though although with the way this poker site likes to run promotions who really knows.

The New Jersey regulated online poker market celebrated their first anniversary this week, with market leader Party Borgata leading the way with an impressive week.  WSOP Nevada has been hot on their heels after the departure of their only competition in the state recently, giving them the whole state to themselves, and last week the two top sites in the U.S were neck and neck.

This week though, Party Borgata put in an 8% gain, to move ahead of WSOP Nevada by 10 players on average, 160 to 150.  WSOP New Jersey sits in third overall with 120 average players, with the All American network pulling up the rear with 70 average players.

While the NJ market has declined lately, they are at least coming up from the bottom they experienced not long ago.  This market has disappointed for the most part and after a year it’s pretty clear that they will not achieve the expectations people had hoped they would, at least not anytime soon, but things are improving a bit at least.

Connective Games, the Russian based company which operates Europe Bet, the Georgian focused online poker site that has made quite a splash lately, is looking to expand their operations, and has now set up shop in Malta in hopes of making more headway into the European market.

Aside from Europe Bet (17th place in the world rankings), they also operate three other online poker sites, South American focused PokerdelaAmericas (27th place), Pokerdom (34th place), and Poker Mira (39th place).  PokerdelaAmericas has been struggling lately but the other two poker sites have been gathering momentum and may be poised to move even higher up the ladder soon.

Connective Games has certainly shown that they have a real desire to grow this company and their entry into Malta shows that they are indeed committed to this.

There’s been talk for quite a while about the Santa Ysabel Indians of California launching a real money online poker site in the state without the permission of the government of California.

California regulated poker has been stalled for quite a while now as legislators and other parties work out the details and try to come to an agreement as far as the terms of the legislation, but the Santa Ysabel tribe doesn’t want to wait for that and have been trying to get an online site up and running ahead of any such legislation.

At the very least, they have come very close to doing that and already have a site up, PrivateTable.com, and if you go to this site it looks like it’s ready for real money play or even offering it now.  We can even be sure that this site isn’t live, although no reports have surfaced about people actually playing for real money on it yet.

Their online bingo site has been hit with a restraining order though by the authorities in California and people are speculating that this could create some problems with the poker site, although there’s no restraining order in place at this time against Private Table.

This situation is interesting to say the least and we’ll be keeping a close eye on this for you.