While online poker traffic was down for the eighth week in a row, this time it only fell by a miniscule 0.1%, so that’s pretty close to virtually unchanged this time. 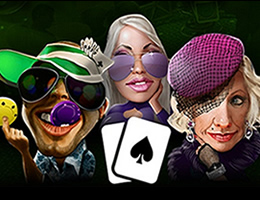 While online poker traffic was down for the eighth week in a row, this time it only fell by a miniscule 0.1%, so that’s pretty close to virtually unchanged this time. Traffic is now only down by 12% from where it was this time last year, a gain over the trend lately as well. 4 out of the top 10 poker sites improved their traffic, which represents another improvement.

So things seem to have picked up a tad and we’ll continue to watch both numbers to see if this ends up being sustained. The week over week numbers are somewhat informative, but the comparison with a year ago even more so.

During the week, Party Poker climbed past iPoker into third place, but iPoker has already regained this spot back. The two are virtually neck and neck these days. Winimax.fr made a bit of a comeback, moving from ninth to seventh, with Bodog dropping from seventh to ninth.

Unibet Doing Well On Its Own

Since their recent departure from the MPN network to forge out on its own, Unibet has been more than holding their own. They now sit in 17th place, up from 27th place just a month ago, and now only a few spots below their former network, who are now in 13th place. Unibet is doing better than some thought they might after this move, and MPN is still hanging in there as one of the busiest poker networks out there, so things seem to be working out pretty well for all involved.  MPN still has about 50% more traffic though than Unibet so it’s not as if they are catching them quite yet though.

Seals With Clubs Getting Clubbed A Bit Themselves

Seals With Clubs, the world’s largest Bitcoin poker site, has been the victim of the struggles that Bitcoin has had.  Bitcoins have dropped 25% of their value of late, mostly due to China looking to close down Bitcoin operations there.

Bitcoins do involve more risk than hard currencies, a lot more risk as it is turning out, and this is causing Seals With Clubs to really suffer.  They saw a decrease of 15% in traffic this week.  They are now struggling even more on the periphery of the rankings, now down to 45th place with a cash player average now below 100 players and a peak below 200.

As much as Seals With Clubs is struggling, it is nothing compared to what is happening at Plutos.net.  They have lost 95% of their traffic in just one week, with an average cash player average down to only 2. That’s just one heads up table. Their peak this week was only 15.

They still weren’t a very busy site and when you’re only talking an average cash player base of only around 40, a few players leaving is sometimes all it can take for things to snowball, as just a few players are pretty significant at a place this small to begin with. This site is pretty much on life support now and we will have to see if they can turn things around and survive.

PokerStars, the world’s most popular online poker site by far, has come out with a new poker software platform called PokerStars 7 which they are planning to soon replace their current software program with.

This will be the most significant software upgrade in the history of PokerStars, with a new look and enhanced functionality. It has been in testing for a couple of years now and for about a year with real money play.

So they really have been taking their time with this, and now have expanded the number of players who are testing it out for them.  Players are of course encouraged to provide feedback which they will use to further refine things.

Among the new features are a revamped lobby, new system and menu options, and a new table theme. The expectation is that once the testing is complete and it is rolled out to the network it will make playing at Poker Stars even more enjoyable.