How to play American Football Poker

American Football poker is a different variation of the game, where players win based on points rather than based on the highest poker hand as in the traditional versions.

How to play American Football Poker 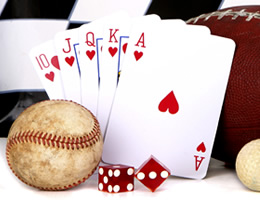 You don't have to be a card shark to know that there are a number of different types of poker games, from Texas Hold 'Em to Omaha, 7-Card Stud to High/Low Chicago. American Football poker is a different variation of the game, where players win based on points rather than based on the highest poker hand as in the traditional versions. The NFL is one of the most watched sporting leagues in the world of sport and now you can combine your love for American Football and poker into one great card game.

In Football Poker, players aren't allowed to look at their cards until they reveal them, gathering points at the end of each hand in the hope of winning the pot. Played with three to six participants, eight cards are dealt to each player at the start of the hand in four stacks of two face down cards. The game then progresses to the betting stage, where each player is required buy into the game before the player to the left of the dealer starts the round, turning over their first pair of cards to represent a quarter of an American Football game. This is then repeated by the other players, each turning over their first stack of cards to start their own games.

The point scoring starts during the first quarter, with players accumulating points for every two, three, six or seven they flip over, with a two representing safety, a three for a field goal, six for a touchdown and a seven for a touchdown with a converted field goal but all other cards deemed worthless. Each player keeps a total of their own points, with each player able to see their opponents’ cards and their total points. The first round of betting follows, usually with the player with the most points starting the betting. In the same way players bet on poker, players can raise, call or fold in Football Poker during each betting stage of the game.

The second stack of cards is then flipped over at kick off the second quarter of the game, followed by a new round of betting started by the player with the most points from the first two rounds, although some players may have folded before this stage. The same betting methods continue before the third stack of cards are flipped followed by the final round of betting with six of each remaining players’ eight cards now face up. The final pair of cards are then turned over and each player then counts up their total points in order to determine who wins the pot, with the player with the most points winning the pot, while those sporting a Royal Flush will be left empty handed.

So, while there might not be many casinos online where you can play Football Poker, this could be the perfect poker game to play when you have some of those friends round who still can't get to grips with the more traditional formats of the game.